Duke of Metal or Deer Whisperer? 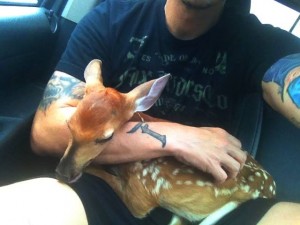 A few hours ago I was going for a run at my local park, and I saw a juvenile deer out in a field about 200 yards away from me. As I got closer, I could tell that something was wrong, as it was very “wobbly”, seemed very weak, and appeared to be disoriented. I watched from about 100 feet away for a couple of minutes, looking around for it’s mother, and just trying to get a better idea of what may be wrong.

I walked slowly towards the deer until I got about 10 feet away. Then, I got down on my knees and started to talk to it. It just walked/staggered right over to me, as to say help me. It’s mouth was open, exposing a swollen tongue, and was taking rapid shallow breaths. I wrapped my arms around her (I would later find out it was a lady), picked the little fella up, and she just collapsed in my arms.

She appeared dehydrated and exhausted. As I carried her back to my car, she just went limp and was having really labored breathing. I put her in the front seat of my car and called my wife Julie, “I have a baby deer in the car…”. She made a bunch of calls and found a local guy who rehabs and fosters injured and abandoned wildlife. On the 10 minute drive, the little lady deer’s breathing slowed a bit, and with lots of stroking, some “baby talk”, and a good blast from the air conditioning, she seemed to relax a bit. When I got to my wife’s work, her boss/my friend/Thrillhammers lead guitarist, Chris Chandler, jumped in his truck and said, “I’ll drive”.

We met Richard Gruhn, the wildlife specialist, and he gave the deer a quick lookover. He said that her mother was likely killed by a car, and thus leaving her abandoned. She had no obvious or visible sign of sickness, injuries, or disease, that would leave him to believe that she would have been purposefully abandoned by her mother. She was just very weak and dehydrated to the point where she wasn’t going to last much longer being exposed on a 90-degree summer day in Georgia.

The little girl got some IV fluids at the animal hospital, then went back to his rehab center to join the 2 other baby deer that he is currently fostering. Apparently, at her age she will do fine on goat’s milk until she can move on to solid food.

Finding this little lady was a gift for me, made my summer. I’ll check up on her over the next few days and give you a report. Keep an eye on my Facebook Page for updates.