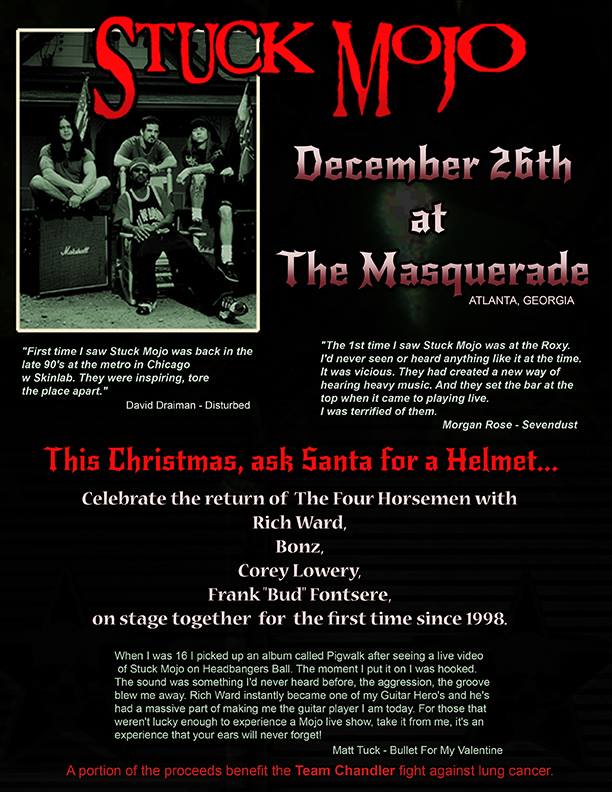 This Christmas, ask Santa for a helmet. Celebrate the return of The Four Horsemen with Rich Ward, Bonz, Corey Lowery and Frank “Bud” Fontsere on stage together for the first time since 1998. A portion of the proceeds will benefit the Team Chandler fight against lung cancer.

The 1st time I saw Stuck Mojo was at the Roxy. I’d never seen or heard anything like it at the time. It was vicious. They had created a new way of hearing heavy music. And they set the bar at the top when it came to playing live. I was terrified of them. Morgan Rose – Sevendust

“First time I ​saw Stuck Mojo was back in the late 90’s at the metro in Chicago w Skinlab. They were inspiring, tore the place apart.” David Draiman – Disturbed

When I was 16 I picked up an album called Pigwalk after seeing a live video of Stuck Mojo on Headbangers Ball. The moment I put it on I was hooked. The sound was something I’d never heard before, the aggression, the groove blew me away. Rich Ward instantly became one of my Guitar Hero’s and he’s had a massive part of making me the guitar player I am today. For those that weren’t lucky enough to experience a Mojo live show, take it from me, it’s an experience that your ears will never forget! Matt Tuck – Bullet For My Valentine

“Every music fan has that band or artist that kicked in the doors and changed their world. In 1996 I saw Stuck Mojo play for the first time, and it changed my entire musical landscape forever. I had been to my fair share of arena rock shows, but nothing could prepare me for the sound, spectacle, and power of what I experienced that night in a 500 capacity venue. They were energetic, raw and unapologetic. Stuck Mojo became my Ramones, my Clash, my Sex Pistols. I bought every record, and went to every show I could. They unknowingly taught me how to be a better musician, a better performer, and more importantly how to treat fans with respect and appreciation. Countless times I have heard versions of this story repeated by musicians and friends in noteworthy platinum and gold selling bands. Stuck Mojo are the true unsung heroes of what rock and metal music is today. Legends.” – Eric Bass – Shinedown